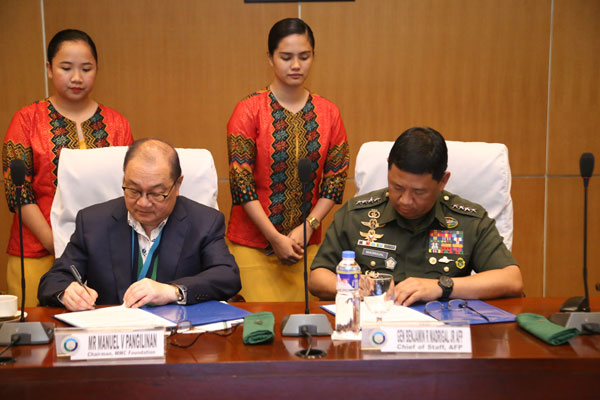 The Armed Forces of the Philippines (AFP) and the Makati Medical Center Foundation (MMCF) have signed a memorandum of agreement to strengthen the capabilities of military hospitals and treatment facilities nationwide.

AFP Chief of Staff General Benjamin Madrigal Jr and MMCF Chairman Manny Pangilinan signed the MOA that will be submitted for the approval of Defense Secretary Delfin Lorenzana.

The MOA is intended to strengthen the human resources of AFP hospitals and treatment facilities through conferences, workshops, training sessions, coaching and mentoring, and other interventions.

Under the MOA, the MMCF shall share technical resources and open its medical facilities for training and learning exchange sessions at no cost to the AFP.

It will also conduct capabilities, resources, and competencies assessment and help in the development of strategic operational plans on policy, systems development, and human resource management.

The signing renews and expands the agreement that started in 2013. The original MOA involves the enhancement of the AFP Medical Center and since then has expanded to 23 AFP medical facilities. The new MOA seeks to strengthen the 46 AFP hospitals and treatment centers nationwide.

“We are happy to announce that MMC Foundation is again partnering with the AFP, but this time for the organizational strengthening of 46 of its hospitals and treatment facilities throughout the country. This is our way of saying ‘thank you’ for the kind of service that you render to all of us,” Chairman Pangilinan said.

The partnership has since benefited the AFP through cross-trainings, donations of medical equipment, employment of joint disaster preparedness measures, and computerization of medical records.

Up to 200 military personnel including battle casualties were also provided with medical services in the MMC facilities under its Health Service Program.

“It is certainly reassuring to know, that as our soldiers are engaged in combat, that the chances of survival is higher with more skilled and capacitated doctors and having well-equipped hospitals,” General Madrigal said.

“I would like to extend our gratitude to the MMC Foundation for the different services that you offer, especially in the capacity-building and training of our doctors and the equipment that you provide particularly in areas where we have more battle casualties,” General Madrigal added